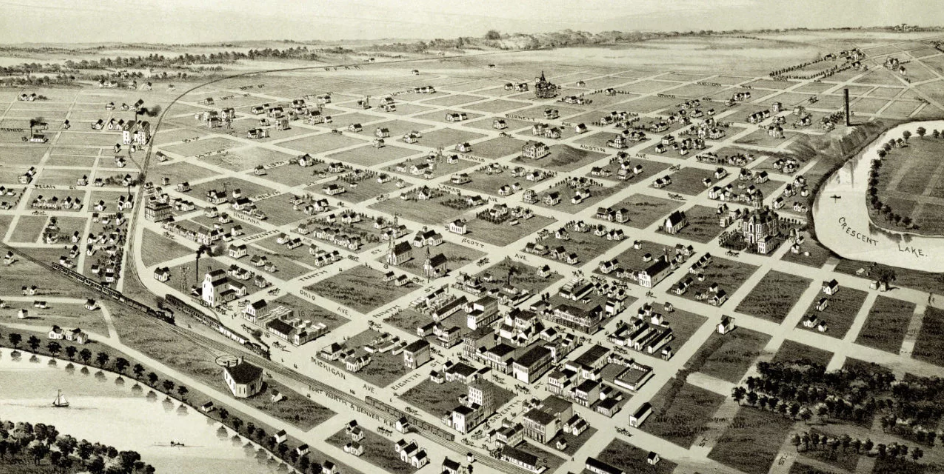 In 1923 or 1924, L. W. Riesen, the writer, became the manager of the Guarantee Abstract and Title Company and remained in that position until 1927 or 1928 at which time L. W. Riesen and John Bland purchased what was then known as Harris Abstract Company. The name was changed and the company was incorporated under the name of Fidelity Abstract and Title Corporation with Bland as President and L. W. Riesen as Vice-President and manager. The Company was operated until the depression began in 1929-1930.

The Guarantee had been sold by the original partnership of Harding et at to a person or persons unknown to the writer. W. P. Killingsworth loaned this person/persons the money for this venture. Shortly after, they became insolvent, and Killingsworth foreclosed and took possession of the company. Subsequently, about 1931 or 1932, he hired the writer as manager and sold one-half interest to him. In 1939, the writer purchased the interest of Killingsworth and became the sole owner of the Guarantee Abstract and Title Company. At that time, Patrick H. McBroom, nephew of L. W. Riesen, was working for the company and purchased stock in the newly incorporated Guarantee Abstract and Title Company. Later, Sidney J. Cathey, an attorney from Ft. Worth, was hired, and he also became a stockholder in GATCO.

The company operated with this management personnel until 1962 at which time L. W. Riesen sold the controlling interest in the company to Cathey and McBroom who became equal owners of the outstanding stock.

L. W. Riesen retained certain rights in the sale to Mr. McBroom and Mr. Cathey–one of these rights, among others, was that the writer would maintain an office in the company’s location for life. L. W. Riesen maintained an office in the Guarantee Abstract and Title Company until 1990. In 1990, Mr. Riesen moved his office to his home at 4808 Maplewood, Wichita Falls, Texas.

Guarantee notified Lawyer’s Title that they could no longer represent them. Guarantee Abstract and Title Company subsequently purchased the Fidelity Abstract Company from Stewart Title and operated it in conjunction with GATCO for two or three years.

Pat McBroom died sometime in the 1970’s, and Sidney J. Cathey became the sole owner of the Guarantee Abstract and Title Company. Sid Cathey retired and sold controlling interest in the company to A. J. Eckstein in 1989 L. W. Riesen owned the building in which the company was located. This building was sold, together with all rights reserved in the original sale to McBroom and Cathey by L. W. Riesen, to Guarantee Abstract and Title Co. whose majority stock was then held by A. J. Eckstine. The sale of the building was consummated February 1, 1990.

It would be an oversight if the writer overlooked the following employees who so diligently contributed their special talents, time and loyalty to the successful operation of GATCO during the ownership of the company by Mr. McBroom, Mr. Cathey and Mr. Riesen.

The employees were Joyce Bryan, Mr. Riesen’s ‘secretary for many years, Sarah Doyle, Jean Davis, Ed Brooker, Ruth Welchel, Tex Hardin, Ruby Richardson, Alice McGee, Lloyd Neely and Annette Anderson. The writer shall always be grateful for the privilege of knowing such fine people and to this day appreciates their devotion, loyalty and excellent work toward the successful operation of the GATCO. Believe me, I miss these fine people and the usually cheerful good mornings which we exchanged when we arrived at the office, for another workday.
-By L.W. Riesen
(In 2007 Herman “Tex” Hardin, Jr updated this short history of GATCO.)

In 1989 A. J. Eckstine brought GATCO into the computer generation, he also purchased the former Muehlberger building at Maplewood and Elmwood. After some remodeling GATCO moved from their old location on 7th street to the new location. About 1996 the business was purchased by Bill Elder, Barney Fudge and Tony Marsh. Shorty after that Sherri Christie was hired as receptionists. She was soon promoted to secretary and then to escrow officer. In 1999 Sherri Christie, Jean Davis, and Herman ‘Tex’ Hardin, Jr purchased the business and changed the name to “Guarantee Title”. In 2003 Jason Christie, Sherri’s husband, joined her in running the business and this continued until their deaths in 2006.